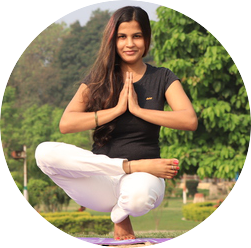 Shashi Singh Kusumakar was initiated into Yoga at a very young age by her mother. Since then she has been practicing yoga, which had a very significant transformative effect and positive impact on her life.

Inspired by her mother, Shashi continued to study under the guidance and supervision of Yoga master Swami Niranjananda Saraswati (Bihar School of Yoga).

Her fervor for yoga has led her to accomplish RYT 200 – Hours Yoga Alliance (USA) from Rishikesh before devoting both, her heart and soul to the cause, full-time. She also holds Master of Arts in Yoga from Uttarakhand University and Certificate of Yoga Teachers.

Shashi, in her yoga sessions, loves to augment creative sequences, a character of light-heartedness and a bout of encouragement to assist her students to deepen their practice. She is ever seeking to lend a hand to everyone around her and encourage feedback from others with complete humility. This has helped her immensely to flourish in life by fostering body, mind, and soul with the help of yoga. She hopes to make YOU step off the mat feeling nourished, refreshed and balanced. 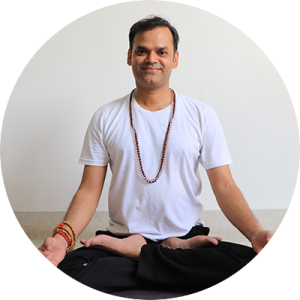 Ashutosh is an ardent Yoga practitioner and teacher. He has cultivated his awareness and interest in Yoga since his childhood and remains committed to intensify his understanding and practice of this ancient science over many decades.

Ashutosh was initiated into Yoga at a very young age by the spiritual and philosophical master Swami Niranjananda Saraswati. Upon completion of his Master in Yogic Sciences, Ashutosh started his Yoga teaching career in 2000 as an intern at Bihar Yoga Bharati, Munger (India).

Since then, Ashutosh has been strongly dedicated to Yoga and conducts his classes with highest enthusiasm and professionalism. Ashuthoh’s primary mission since then has been to teach a holistic approach to Yoga that is aimed at incorporating the Spirit of Yoga into his student’s daily habits while improving their overall quality of life.

Ashutosh explains Yoga very beautifully in his own terms – According to him, Yoga is coordination between Head, Hands, and Heart, where Head represents thinking, Hands the deeds you do and Heart represents the feelings/emotions. If coordination among these three entities in your body balances and complement each other, blissful life is guaranteed.

Ashutosh over these years has played many roles in teaching Yoga in India and across the globe. As an Instructor to Consultant, Ashutosh has handled various Workshops, Group Sessions, Therapy Sessions, Private classes in many countries including – India, Singapore, Macau, Hong Kong and others.

As a yoga instructor, he aims to create a welcoming and enjoyable space for people to feel energized yet relax through their yoga practice. His classes focus on stretching and extension along with alignment and synchronized breathing that helps to build strength, stability, flexibility and mental calmness. He encourages practicing Asana in gentle approach, which enables all the students to work at their own pace.